Pest ranking based on the KVH risk matrix

The Spotted lanternfly (SLF) is an emerging biosecurity threat to kiwifruit and many other horticultural industries. The pest is hard to control and is a proven invader, capable of flying and hitchhiking on inanimate objects.

SLF attacks over 70 host species, including kiwifruit, grapes, stonefruit and pipfruit. It's preferred host is Tree of Heaven, which is present in New Zealand and considered an invasive weed.

Adults and nymphs feed on young stems and bark tissue with their piercing and sucking mouthparts and excrete large amounts of sticky liquid called honeydew. Extensive feeding results in oozing wounds on trunks, wilting and death of branches. It could severely impact the kiwifruit industry through the sooty mould left on fruit, which renders the fruit unmarketable.

Native to Asia, SLF has invaded North America, where it's numbers have grown rapidly. It is thought to have entered as egg masses on landscaping stone from China and eradication attempts have been unsuccessful. The impacts of SLF have been described as worse than Brown Marmorated Stink Bug (BMSB).

How could it get to New Zealand? The SLF lays its eggs in clusters on smooth surfaces (including vehicles and machinery, shipping containers, and garden furniture) and covers them with a protective layer of wax. The eggs can then hitchhike on these and other commodities imported into New Zealand. The egg masses are difficult to see and hard to treat with insecticide - see images below of egg masses on kiwifruit and tree bark. 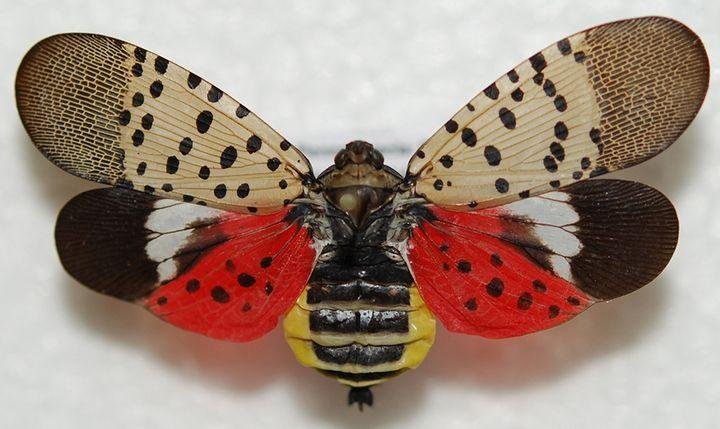